We all are familiar with 11 sayings of Sai Baba of Shirdi. Devotees come across these lines very often. But very few are aware of hidden meaning in those 11 lines. So in this post, I would like to highlight the meaning of these lines. It seems that through this first line, Shirdi Sai Baba has put His Holy Hands on His devotees head. Sai Baba has taken responsibility to take care of His devotee who visits Shirdi, takes darshan of Samadhi and surrenders completely to Him. Sai Baba’s soul is still present in Shirdi and so He has given such promise. This promise has been fulfilled by Sai Baba and in turned increased devotees’ faith.

In this Kaliyug, all of us are suffering from one problem or another. Some suffer mentally, some physically, some economically, some socially… and there is no end of sufferings. In such condition only encouraging words from our close ones or money alone is not enough. Only Sadguru Sai can only help in time of distress. Whosoever takes darshan of Sai Baba’s Samadhi gets free from such distress. Thats the reason why so many devotees are flocking to Shirdi now a days. This is the proof of truthfulness of Sai Baba’s words.

Though Sai Baba is not with us in bodily form, but I dont think we miss His presence. Every now and then He comes running to His devotees to take them out of difficulties. I am reminded of a popular bhajan “Thoda Dhyaan Laga, Sai Daude Daude Ayenge, Thoda Dhyan Laga…” When He was in bodily form He had promised His devotees to be with them for ever and He has been fulfilling this promise even today.

The Samadhi of Sai Baba is not an ordinary person’s samadhi. It is a Divine Human Being’s Living Samadhi. The Divine Soul of Sai Baba is always present near Samadhi. “My tomb will speak with you all” were the words of Sai Baba. If any devotee keeping these words in mind medidate on the ‘Formless’ form of Sai Baba, these words turn out to be true. It is very natural that in tough times only we humans remember God, but if we remember our Sai Baba in grief and happiness, He is with us always.

There is very deep meaning in this fifth promise given by Sai Baba. The soul is indestructible. We replace old clothes with new ones. Similary a soul sacrifies one body and enters into another. So it is very well understood that even if Sai Baba has left His mortal coil, His soul is still around us. Sai Baba has no end and He is watching our good and bad deeds each moment. Thus such thought will not allow us to do any bad deed and we all ever conscious to attain Him.

It has never happened that a devotee faced disappointment who have surrendered himself completely to Sai Baba. He never avoids anyone who come to His refuge. There were hidden blessings even in His scoldings. Even devotees took those scoldings as blessings. It can be compared to beatings from a teacher for progress of his student. Though these beatings seem harsh to the student, but they prove to be fruitful when he does well in studies. This, even, improves child’s mental ability. Leelas of Baba were much difficult to understand. Every action of His conveyed deep meaning which we ignorant humans failed to understand. Still whosoever surrender completely to Him received His divine blessings in one way or the other.

The more intense the love of devotee for Sai Baba, the more easily he can attain Him. There are many such instances where Sai Baba gave darshan to His devotess of those Gods whom they worshipped and praised. This promise says that we can worship Sai Baba thinking Him to be form of any God and He is there to bless us as per our devotion.

Sai Baba Himself takes the responsibilities of devotees who has complete faith in Him. He has taken out many devotees from worldly sackles. He has given eyes to blind person, limbs to lame person and peace of mind to disturbed person by His mere darshan. He Himself suffered many a times for His devotee’s welfare. So why to fear when He is with us day and night. We only have to look at Him and we can find Him already looking at ourselves lovingly and ready to help with His helping hands.

Sai Baba had such love for His devotee which a father has for his son. Whosover goes for darshan of Sai Baba with pure heart surely gets what he wants. He is always ready with helping hands for His devotees. He can be rightly called a ‘Kalpavruksh’. He wants us to cast our burden of good and bad deeds on Him, so that the sense of doership vanishes and we starting walking on that path from where we can attain Almighty.

The devotee who has surrendered everything in the Lotus Feet of Shri Sai becomes one with Him in all respects. Sai Baba encouraged reading of spiritual books to take His devotees to the path of Sadgati who showed immense love towards Sai Baba. It was his prime duty to create interest for spiritual matters in the minds of His devotees. To go ahead in spirituality, one must be ever curious to seek the advice and help of Guru and where can we find more capable, loving and caring other than our beloved Sai Baba?

Every human should try to complete his responsibility after getting birth of a human being. They must surrender themselves completely to Sadguru and in turn make way to attain Almighty. Saints are the form of God. They have quality to transform Nar (human being) into Narayan (God). Thus whosoever soughts refuge of Sai Baba, surenders himself to Him are qualified to be called ‘Rich’ in true sense. Then the responsibility of looking after materialistic matters of that devotee is on the shoulders of Sai Baba. 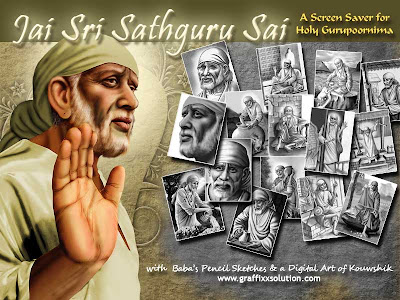 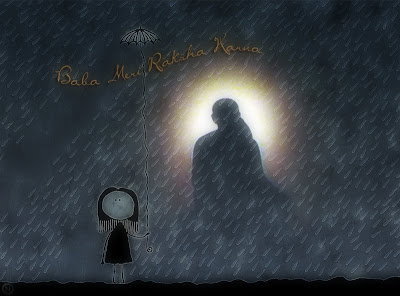 Change in Schedule of Shri Saibaba Samadhi Temple (Shirdi) during Eclipse on July 22, 2009 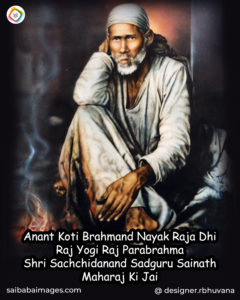