In last post we read about how Hemapant was enrolled in Sai Baba’s Darbar. Continuing with the stories from Sai Sarovar, here is a story more interesting than the previous one. It clearly illustrates Baba’s Sambhav Drishti towards rich and poor men. Sai Baba gave different names to His devotees whom He called to Shirdi on His own accord and made them stay there. The names given by Him were very apt and indicated their future deeds. Here are few examples:

– Baba called Radhakrishnamai as “Avdasha” meaning bad condition. Radhakrishnamai served Baba and it would not be wrong to call her Param Bhakt (foremost devotee), but her end was very painful and her condition become worst during last stage of her life.

– Baba used to call Madhavrao Despande as “Shama” or sometimes lovingly called “Shamya”. Baba gave him pure love which can be compared to love of Shri Krishna and Arjun.

– Kaka Saheb Dixit was named “Langda Kaka”. The lamness of his leg remained till his end.

– Loving Tatya Patil was nicknamed “Ghodmukhiya” (one who has face as a horse).

– Everyday in evening Pilaji Gurav used to play flute in front of Baba, he was named as “Guvarvacha”

– Shri B.V.Dev was named “Chindardi Chor” the one who steals rags.

Apart from human beings, animals were also Baba’s Darbari. A horse “Shyamkarna” was one of those Darbari. Baba’s heart is softer than wax, He had takes care of every creature. He had never used the horse for His own purpose. Madhav Phasle had been entrusted work of taking care of the horse and Baba paid him adequately for his work on daily basis. The horse was brought at the time of Arti in front of Baba and after the Arti was over, it would raise and fold its two legs in front of Baba as if offering Namaskar.

Baba used to sleep in Chavadi every alternate day. The building of Chavadi is very near to Dwarkamai. Still Baba used to descend to Chavadi with great pomp and show. The splendor of the procession was not less than any King’s procession. The procession would complete one full round of the village and at about 10 p.m. it would reach Chavadi. In the procession, Shyamkarna was positioned ahead of Baba and it walked with uniform speed. It adnored the procession as a peacock with its open feather adorns forest while its raining. Other than this, the horse was not used for any other purpose.

There was a dealer of horses in Pune by name Abdul Gani. Abdul Gani had taken vow to offer one horse to Baba if he got good profit in some of his transactions. With Baba’s grace transactions fared him well. As per his vow he sent his servant Dhondhu with a beautiful horse to be offered at the Lotus Feet of Baba. It was not decided from whom Dhondu had to take remuneration before hand. He started for Shirdi with the horse.

Dhondhu reached near Dwarkamai during hot afternoon. Sai Baba was meditating in Dwarkamai. Radhakrishnamai was in front of Baba. Knowing that Baba is in meditation, Dhondhu tied horse in courtyard of Dwarkamai and asked for his renumeration to Radhakrishnamai. Radhakrishnamai sent him to Madhavrao Deshpande. He said, “Bhau! Sai Baba is the owner of all Three Loks, if you go and ask Him, He will give you much more than you deserve”.

Dhondhu was very poor man. He was able to arrange for food only if he got some money by doing labour work. He went to Shirdi in hot afternoon and was desirous of getting some money. Even more he was sent to get money from one person to another. He became angry on hearing Madhavrao’s answer. He thought, “How can this be?! Can owner of Three Loks live in such a small Masjid? Can a Fakir who begs food from people of Shirdi be owner of Three Loks? Moreover that blind devotee of His says that Baba will give you more than you deserve. If he is owner of Three Loks He must be seated on the throne of Lord Indra, what is He doing in Shirdi? He came back to Dwarkamai shouting and abusing on the top of his voice. Hearing Dhondhu shouting thus, Baba’s concentration was shattered. Baba’s silent mood turned into an angry one. His eyes were red as fire. He came down the steps of Masjid and started running behind Dhondhu. While running Baba picked up a stone and threw at Dhondhu vigorously. Blood started oozing out from Dhondhu’s head and he was badly hurt.

Dhondhu took this act of Baba as his insult and he went running to police station of Shirdi to report complaint against Baba. This news spread like fire in whole Shirdi. Kakasaheb Dixit was taking noon nap after lunch. As soon as the news fell into his ears he went to police station. He tried to pacify Dhondhu saying, “One who is very fortunate gets such blessing in the form of beating from Sai Baba. To get such blessings we are living here leaving our family and house far away, still we are just waiting”. He took out two currency notes of hundred rupees from his pocket and placed in Dhondhu’s hand. Kakasaheb Dixit adviced him to purchase a horse tonga to start his own independent business with the name of Sai Baba. Thus Kakasaheb showed Dhondhu a new way of life by helping him monetarily and asking him to leave labour work as per the wish of Baba. Dhondhu purchased a horse tonga and started his own independent business as adviced by Kakasaheb Dixit. He also purchased a farm of his own by earnings of his business and lived his later life in peace and happiness.

Dear Readers, such are the Leelas of our Beloved Baba. This Fakir can convert a King into beggar and a beggar into King. I bow to the Holy Feet of Sai Baba who made an ordinary labourer earning one Anna per day, a land owner in few minutes!!! 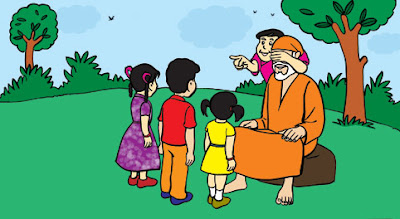