Shirdi Sai Baba has said, “Let His man (Devotee) be at any distance, a thousand kos away from Him, he will be drawn to Shirdi, like a sparrow, with a thread tied to its feet”. Nobody knows which strings Baba pulls and interlink to pull His devotee towards Him.

Readers must be aware of stories of Tendulkar family narrated in Sai Satcharitra Chapter 29. Wonderful are those stories. In the first story Baba helped to pass Tendulkar’s son in medical examination and proved words of astrologer wrong. In another story He helped Mr. Tendulkar to settle his pension after early retirement. The following story is not directly related to Tendulkars, but a short narration of their characters is given in introduction and a story of Muslim devotee of Baba, how he was pulled to Him is given.

Bandra area of Bombay was not so developed at the time of Sai Baba. It was considered a small suburb of Bombay city. A medium class Tendulkar family lived in Bandra. Raghunath Tendulkar worked in a well known company of Bombay and earned rupees one hundred and fifty as monthly salary. His wife’s name was Savitribai.

Both husband wife did Kirtan/Bhajan of Baba with great devotion, composed bhajans with nectar like words flowing from their souls. Savitribai sang bhajans very beautifully with her sweet voice. With the grace of Baba, she used to be so much engrossed in singing bhajans, that she lost her senses. Savitribai was well-known as a Sai Devotee in whole of Bandra. A muslim by name Adam Miya Dalal lived in Bandra near Navapada Masjid. He worked on brokerage as an estate agent. One day a gentleman came to Adam Miya with original documents of his house and fell down at his feet. He said, “I am in big trouble. I need money immediately. You take whatever commission you want, but help me out to get some money through any familiar money lender of yours. I have original documents of my house with me, you can hypothecate my house and lend me money. Adam Miya felt pity on that gentleman and recommended him to familiar money lender. The money lender lent him the desired amount of loan and hypothecated his house by keeping the original documents. Adam Miya became guarantor in this transaction. After completion of stipulated time of loan, the gentleman did not repay the debt, so money lender sent documents to verify its authenticity. On examination the documents came out to be fake. Now Adam Miya who acted as a guarantor was held responsible for the issue. The gentleman was sued and the case was held in Civil Court. Adam Miya was also summoned to court for hearing. Adam Miya came to Savitribai Tendulkar and started imploring her to show some way for rescue.

Savitribai gave some Udi to Adam Miya which he consumed a little and applied the rest on his forhead on the judgement day. He was released without any charge on him. From that day he became an ardent devotee of Sai Baba. There are many ways in which Saints pull their devotees. But this Saint is unique and His deeds are extraordinary beyond one’s imagination. He first raises the storm and calms it and in turn makes His devotees come close to Him. Sometimes He seems to be ahead of the storm and sometimes He is behind the storm!!! The moral of the story is that if we act keeping good intentions in our mind, our Sai is always there to save us. Our heart must be pure while doing any deed. Baba has said never to have sense of doership. Whatever deed, good or bad, must be left completely on Baba. He has also said that one has to bear fruits of our actions. But I feel that if we have surrended ourselves completely to Baba, indirectly we are also surrendering our deeds to Him. So our deeds are not ours and in turn fruits of the deeds are also not ours. In the end a question arises that if we have surrended everything to Baba then where is our identity? Our identity gets merged in Baba’s identity. Hum to Hamare Hai Hi Nahi, Bus Hum Baba Ke Hai aur Baba Hamare…!!! 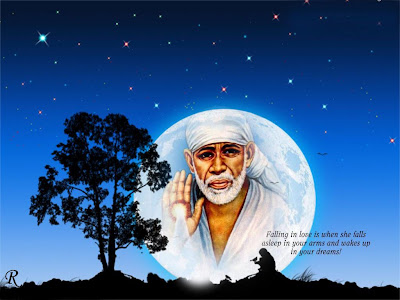 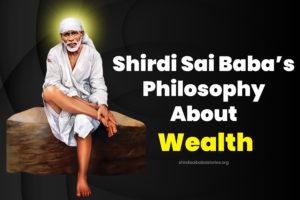