Sai Baba was not only popular in Maharashtra region, but His fame reached to many other states of India too. Baba was worshipped in almost all the houses of Madhya Pradesh. Out of them there was a staunch devotee of Baba named Shri Krishnarao Narayanrao Parulkar residing in Harda city. Originally he was devoted to Lord Dattatreya, but gradually he was attracted towards Baba and realised that Baba was an incarnation of Lord Dattatreya. He worshipped Baba considering Him to be Lord Dattatreya. He used to celebrate Lord Dattatreya’s Jayanti on Magsar Sud Poornima by feeding about 100 brahmins. If in any year, he was unable to fulfill this practice, he compensated it by feeding double i.e. 200 brahmins in next year. Thus he made it a decision to perform this practice no matter what difficulty may come.

Six years after Baba took Mahasamadhi i.e. in the year 1924, due to be unavoidable reasons, Parulkar could not perform the feeding ritual. So now in the year i.e 1925 it was decided to feed 200 Brahmins. A list was prepared to invite the guests.

Next day when Parulkar was doing his morning pooja sitting near shrine of his house, a strange thought crossed his mind, “It is a good occassion and if Baba was in flesh, I would have sent Him invitation too.”

Sai Baba takes care of various religious functions of His devotees and this is known to us. Those who surrenders Baba in every respect, who worships Him without any worldly attachments, Baba always resides in those devotees’ hearts.

Meanwhile Parulkar heard a voice saying, “Dont think that I am not with you now as you cant see Me. If you wish to feed Me, then send invitation to Kakasaheb Dixit. There is no difference between Me and Kakasaheb. Divine relations exist between us. You invite Kakasaheb and if he is fed with whole hearted devotion, it is equivalent to feeding Me.”

After retiring from his daily chores, Parulkar sat in a corner and started thinking, “Where is Mumbai and where is Harda of Madhya Pradesh? Will Kakasaheb come to Harda only for one time meal from Mumbai? Would it be feasible?”

Then a second thought came that it was only a delusion of his mind. He again heard a voice, “Why are you thinking so much, at least send him the invitation.”

When again the sound was heard the second time, Parulkar was assured that the voice was of none other than Sai Baba of Shirdi. He recognised the voice and concluded that it was a delusion. There was no harm in writting and also if Kakasaheb steps in Parulkar’s house, it will become pious and holy.

Moreover he was reminded of an incident which took place in the year 1912. It showed how Baba kept His promise and sent Shama to Thread (Concluding) Ceremony of eldest son of Kakasaheb Dixit and marriage function of Nanasaheb Chandorkar’s eldest son. Sai Baba is such a God who fulfills all the wishes of His devotees, then how can He ignore any invitation given by His devotees with unbounded love? He was also reminded of Baba’s words, “This Shama and I are one. Shama is my Roop, if you take Shama with you, it is equivalent to taking Me.” These words were spoken by Baba on receiving invitation from Kakasaheb Dixit and Nanasaheb Chandorkar. They both were learned persons and they could easily distinguish between real and unreal. They accepted Baba’s words immediately. Then there was no need for any doubt in his mind. Thus gaining confidence now Parulkar wrote a detailed letter to Kakasaheb and invited him to be present in the feeding ceremony.

Shama was in Mumbai when Parulkar’s letter reached to Kakasaheb Dixit. All learned devotees of Baba looked upon Shama as Roop of Baba only.

Datta Jayanti was on Monday and Parulkar did not receive any reply from Kakasaheb till Sunday night. So on next day i.e. Datta Jayanti, Parulkar sat in his pooja room and started praying to Baba, “O Dear Sai! You are ocean of happiness, a treasury of true love, all the three loks can be attained by Your grace, Your name is the sole refuge of this world. As falling of rain is useless after the farm has dried up, so it will be useless if You take form of Kakasaheb and come to my house after this auspicious day. O Baba please come to attend this holy function in any form You like”.

At noon when preparation for lunch were going on, dishes were being served, Parulkar again went near Baba’s photograph and prayed mentally, “A saint who has Maya for money becomes a reason for laughter for the world, similarly without You or Your representative’s presence, I will become a reason for laugher”. While speaking these words Parulkar’s throat got choked, tears came out of his eyes and he started crying loudly.

Meanwhile postman came with a telegram. The telegram was from Kakasaheb and he had written “I and Madhavrao, both are coming to attend auspicious function”.

Hearing the name of Kakasaheb and Madhavrao, everyone present there was pleased. With the permission of elders and Brahmin guests, the lunch was postponed for sometime and all went to railway station to receive Baba’s representatives and both were welcomed with great honour. Parulkar’s home became pious and holy with the touch of Baba’s representatives and all enjoyed the holy feast with great contentment. Dear Sai Readers this is how Baba takes care of any auspicious occassion of His devotees and increases faith in Him. 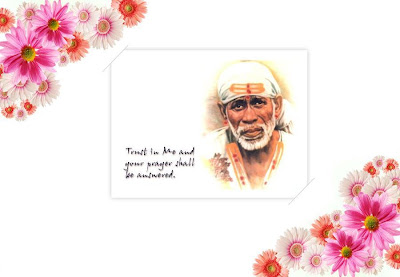 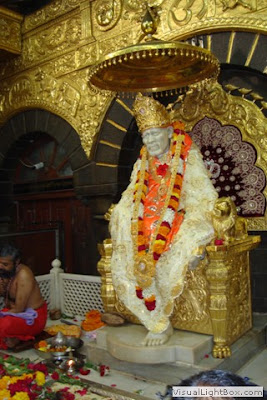