Happy Mahashivratri to all Sai Readers !!! May Sai Baba and Shankar bless you with everything you deserve.

On this Shivratri day I am reminded of the story of Sai Devotee Megha whow was a staunch devotee of Lord Shankar previously, but with Baba’s grace and will later on he started worshipping Baba as Lord Shankar. Here I am quoting the same instance from Sai Satcharitra Chapter 28. But before that I would like to thank young Sai Devotee Nimesh share few awesome pictures for this occasion and other Sai Baba wallpapers which will be shared with you all in subsequent posts. To download in original format, click on pictures below.

Megha of Viramgaon was a simple and illiterate Brahmin cook of Rao Bahadur H. V. Sathe. He was a devotee of Shiva and always chanted the five syllabled mantra ‘Namah Shivaya’. He did not know the Sandhya nor its chief mantra, the Gayatri. Rao Bahadur Sathe was interested in him, got him taught the Sandhya and the Gayatri. Sathe told him that Sai Baba of Shirdi was the embodied form of the God Shiva and made him start for Shirdi. At the Broach Railway station he learnt that Sai Baba was a Moslem and his simple and orthodox mind was much perturbed at the prospect of bowing to a Moslem, and he prayed to his master not to send him there. His master, however, insisted on his going there and gave him a letter of introduction to his (Sathe’s) father-in-law, Ganesh Domodar, alias Dada Kelkar at Shirdi, to introduce him to Sai Baba. When he reached Shirdi and went to the Masjid, Sai Baba was very indignant and would not allow him to enter. “Kick out the rascal” roared Sai Baba, and then said to Megha – “You are a high caste Brahmin and I am a low Moslem; you will lose your caste by coming here. So get away.” Hearing these words Megha began to tremble. He was wondering as to how Sai Baba had come to know about what was passing in his mind. He stayed there for some days, serving Sai Baba in his own way, but was not convinced. Then he went home. After that he went to Tryambak (Nasik District) and stayed there for a year and a half. Then again he returned to Shirdi. This time, at the intercession of Dada Kelkar, he was allowed to enter the Masjid and stay in Shirdi. Sai Baba’s help to Megha was not through any oral instruction. He worked upon Megha internally (mentally) with the result that he was considerably changed and benefited. Then Megha began to look upon Sai Baba as an incarnation of Shiva. In order to worship Shiva, bela leaves are required and Megha used to go miles and miles every day to bring them and worship his Shiva (Sai Baba). His practice was to worship all the Gods in the village and then come to the Masjid and after saluting Sai Baba’s gadi (asan) he worshipped Sai Baba and after doing some service (shampooing His Legs) drank the washings (Tirth) of Sai Baba’s Feet. Once it so happened that he came to the Masjid without worshipping God Khandoba, as the door of the temple was closed. Sai Baba did not accept his worship and sent him again, saying that the door was open then. Megha went, found the door open, worshipped the Deity, and then returned to Sai Baba as usual.

On one Makar-Sankranti day, Megha wanted to besmear the body of Sai Baba with sandal-paste and bathe Him with Ganges water. Sai Baba was first unwilling to undergo this operation, but at his repeated requests, He consented. Megha had to traverse a distance of eight koss (going and returning) to bring the sacred water from the Gomati river. He brought the water, made all preparations for the bath at noon and asked Sai Baba to get ready for the same. Then Sai Baba again asked him to be freed from his bath saying that, as a Fakir He had nothing to do (or gain) with Ganges water; but Megha did not listen. He knew that Shiva is pleased with a bath of Ganges water and that he must give his Shiva (Sai Baba) that bath on that auspicious day. Sai Baba then consented, came down and sat on a pat (wooden board) and protruding his head said – “Oh Megha, do at least this favour; head is the most important organ of the body, so pour the water over that only-it is equivalent to the full or whole bath.” “Alright” said Megha and lifting the water pot up, began to pour it on the head but in doing this he was so much overwhelmed with love that he cried out ‘Har Gange’ and emptied the pot on the whole body. He kept the pot aside and began to look at Sai Baba, but to his surprise and amazement he found that Sai Baba’s head was only drenched but the body quite dry.

Megha worshipped Sai Baba in two places; in the Masjid he worshipped Sai Baba in person and in the Wada, Sai Baba’s big picture, given by Nanasaheb Chandorkar. This he did for 12 months. Then in order to appreciate his devotion and confirm his faith, Sai Baba gave him a vision. Early one morning when Megha was still lying down on his bed with eyes closed but internally awake, he saw clearly Sai Baba’s Form. Sai Baba knowing him to be awake threw Akshata (rice-grains marked red with Kumkum) and said, “Megha, draw a Trident” and disappeared. Hearing Sai Baba’s words, he eagerly opened his eyes but did not see Sai Baba, but saw only rice grains spread here and there. He then went to Sai Baba, told Him about the vision and asked permission to draw Trident. Sai Baba said – “Did you not hear My words asking you to draw Trident? It was no vision but direct order and My words are always pregnant with meaning and never hollow.” Megha said – “I thought you woke me up, but all the doors were closed, so I thought it was a vision”. Sai Baba rejoined -“I require no door to enter. I have no form nor any extension; I always live everywhere. I carry on, as a wirepuller, all the actions of the man who trusts Me and merges in Me.”Megha returned to the Wada, and drew a red Trident on the wall near Sai Baba’s picture. Next day a Ramadasi Bhakta came from Poona, saluted Sai Baba and offered Him Pindi (an image of Shiva). At this time Megha also turned up there. Sai Baba said to him – “See, Shankar has come, protect (i.e., worship) Him now.” Megha was surprised to see Pindi following Trident immediately. Then also in the Wada, Kakasaheb Dixit was standing with a towel on his head after having taken his bath, and was remembering Sai, when he saw a Pindi before his mental vision. While he was wondering about this, Megha came and showed him the Pindi presented to him by Sai Baba. Dixit was happy to know that the Pindi exactly tallied with the One he saw a few minutes before in his vision. In a few days after the drawing of the Trident was complete, Sai Baba installed the Pindi near the big picture which Megha was worshipping. The worship of Shiva was dear to Megha and by arranging the drawing of the Trident and the installation of the Pindi, Sai Baba confirmed his faith therein.After continuous service of Sai Baba for many years, doing regular worship and Arati every noon and evening, Megha passed away in 1912. Then Sai Baba passed His hands over his corpse and said – “This was a true devotee of Mine.” Sai Baba also ordered that at His own expense the usual funeral dinner should be given to the Brahmins, and this order was carried out by Kakasaheb Dixit. 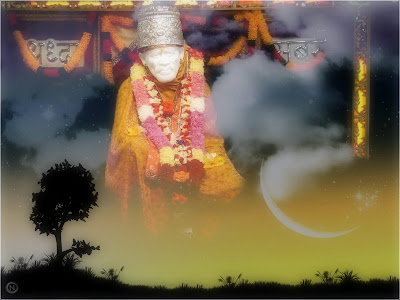 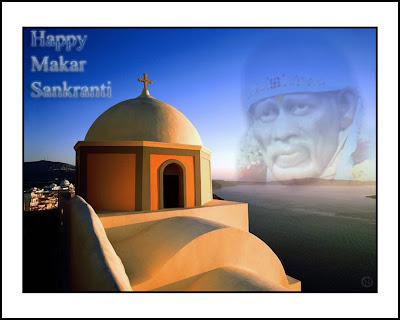 Happy Sai Makar Sankranti To All