Sai Baba’s fame had reached to every nook and corner. Mumbai’s revenue commissioner was one of them who heard about Sai Baba’s leelas. His name was Mr. Curtis. He told about Leelas of Baba to his wife and added that Baba is God on Earth. Though Mrs. Curtis was an European lady, she was very much interested in religious matters.

In outward terms Mrs. Curtis was happy and contended. But she was unhappy from within as she was childless. All the time she was in depressed state. Thus Mr. Curtis went to see Sai Baba as his last hope. It was morning and Baba had returned from Lendibaug. Madhavrao Deshpande, Dasganu Maharaj and Kakasaheb Dixit were present. Baba sarcastically said these words pointing at Mr. Curtis, “These cunning people come for My Darshan, but I am also a simple human like you”.

The english couple was standing at some distance. At the same moment a devotee by name Shri Nilkant Sahastra Buddhe entered Dwarkamai with Pooja plate in his hands. Seeing men in government uniform he paused. Commissioner Curtis’s servant went forward and said to Nilkant Sahastra Buddhe, “Go and inform your Sai Baba that state’s highly honoured officials have come to meet Him. So if He has finished His daily routine, He may please call them”. Nilkant Sahastra Buddhe replied, “O Brother, i dont have any problem in forwarding your message and inform Sai Baba about your intention. But I doubt that Sai Baba will not meet you as your traits are not like saints. If you wish to meet any saint, you have to be very polite, must possess strong desire to meet him. There is no room for dominance. You cannot go to Saint’s place with intention to test them. Proudness of your learning and richness have no place in saints courts.

Sahastra Buddhe went inside Dwarkamai and passed on the message to Sai Baba with folded hands. Baba didn’t reply. The English couple waited for long time to get Baba’s reply. Still the result was the same. Meanwhile Baba got up, took his Satka and Tumbler in His hands and put His Jholi on His shoulders and was proceeding towards NandRam Marwadi’s house for begging alms. The Commissioner’s servant quickly went to Baba, folded his hands and again requested to allow his master to meet Him.

Baba begged alms from four houses and returned to Dwarkamai. After arti the whole atmosphere was surrounded by cries of “Victory be to our Sadguru Sai Maharaj, Who is Pure Consciousness, Knowledge and Bliss ” Sai Baba came near steps of Dwarkamai and disributed Udi to all present there. Still the English couple was not called.

Mr. Curtis again sent his servant with the same message. Again the answer came, “Still one hour to go”.

Meanwhile KakaSaheb Dixit was seen returning from Dwarkamai to his residence. The servant went near him and again requested the same. KakaSaheb Dixit shared a verse from Ramayana by TulsiDas – “यद्यपि मित्र – प्रभु – पितु – गुरु गेहा, जाइय बिनु बोले हूँ संदेहा, तध्यपि विरोध मान ज हं, त हं गए कल्याण न होई – Yadhayapi Mitra Prabhu Pitu Guru Geha , Jaiya Binu Bole Hu Sandeha, Tadhyapi Virodh Maanj Hum Koi, Tahi Gaye Kalyan Nah Hoyii ” meaning There must be no doubt in going to your friends and father’s place, God’s temple or Guru’s Darbar without invitation. But where there is feeling of jealously and opposition there is no benefit of mankind by going there.

Shed off your doubts and have Darshan of Sai Baba in Dwarkamai. My Beloved Sai Baba’s darbar is always open and there are no restrictions with time.

Mrs. Curtis was mentally praying to Baba to fulfill her wish. Baba said, “These cunning people come for My Darshan. Allah Sab Ka Malik Hai, Allah Sab Ki Manokamna Purna Karnewala He – Allah is God of all, He will fulfill everyone’s wishes.

Hearing these sweet words of Sai Baba the English couple was full of emotions. They were overflowing with love for Sai Baba. They again bowed down to Baba’s feet.

Now everybody present in Dwarkamai came to know significance of Baba’s words “These cunning people come for My Darshan” which He uttered in morning.

After this incident ten months passed. A cute baby boy took birth to this English couple. They went to Shirdi with the infant for Baba’s darshan. Baba proved His words practically, “I do not require any worship either eight fold or sixteen fold. Worldly pandits do such things, but I dont. Instead where is true devotion from deep heart, I am always present. I am only hungry for your love”. 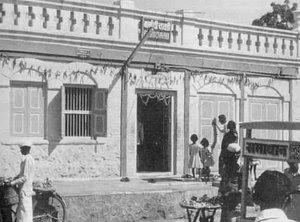