Posts in this series:

There are four methods of obtaining God-realisation – Gyana (Knowledge), Yoga (Control of Mind), Karma (Selfless work) and Bhakti (Love of God). The method knowledge is the quickest but it is very difficult and there is a chance of failure due to conceit. In Yoga method, the body and the mind have to be strained greatly and quite a few restrictions are to be observed in intake of food and drink. In the Karma method, a common man finds it difficult to give up doership and fruits of his actions. However, the method of love of God is different. It is the easiest of all and can be conveniently followed by all even while leading a secular life. That is why Sai Baba repeatedly advised His devotees to follow the Bhakti Marg or love of God.

In chapter 6 of Sacred Text – Shri Sai Satcharitra, Hemadpant quotes Sai Baba’s words as thus : Four paths, viz., of Karma, Gynana, Yoga and Bhakti lead us separately to God. Of these, the path of Bhakti is thorny and full of pits and ditches, and thus difficult to traverse, but if you, relying on your Sadguru, avoid the pits and thorns and walk straight, it will take you to the destination (God).

Bhakti means real and deep love for God. It can be considered as an love affair with God. When we are in love, we are always engrossed in thoughts of our beloved. Similarly when we are in love for God, our thoughts are dedicated to Him. Thus in a way the path of devotion is not so hard as compared to others. Our deep love for our beloved makes way to be with him/her forever, the same applies to our affair with God – Bhakti

Two Types of Devotion : There are two aspects of God or Brahman : (1) the Unmanifested (Nirgun) and (2) the Manifested (Sagun). The Nirgun is formless, while the Sagun is with form, though both denote the same Brahman. Some prefer to worship the former, some the latter. As stated in the Gita (chapter XII) the worship of the latter is easy and preferable. As man has got a form (body, senses, etc.), it is natural and easy for him to worship the God with form. Our love and devotion do not develop unless we worship Sagun Brahma for a certain period of time, and as we advance; it leads us to the worship (meditation) of Nirgun Brahma – Chapter 11. Thus to attain the position of Nirgun worship, Sai Baba not only professed Saguna worship to His devotees but also tired to convince them about it effectiveness by giving them personal experiences

Few instances from Sacred Text – Shri Sai Satcharitra can be quoted with regard to this teaching:

1. A Saint of Bombay named Balabuva Sutar, who on account of his piety, devotion and bhajan, was called “Modern Tukaram”, came to Shirdi for the first time in 1917. When be bowed before Baba, the latter said “I know this man since four years”. Balabuva wondered and thought, how could that be, as that was his first trip to Shirdi. But thinking about it seriously he recollected that he had prostrated himself four years ago before Baba’s portrait at Bombay and was convinced about the significance of Baba’s words. He said to himself, “How omniscient and all-pervading are the Saints and how kind are they to their Bhaktas! I merely bowed to His photo, this fact was noticed by Baba and in due time He made me realize that seeing His photo is equivalent to seeing Him in person!” – Chapter 33.

2. In chapter 9, we have read about Tarkhad family. Babasaheb Tarkhad was a member of Prarthana Samaj and did not believe in the worship of idol and pictures. On the contrary, his son and wife worshiped Sai Baba’s portrait in their house. Both mother and son visited Shirdi with promise from Babasaheb Tarkhad to perform daily worship of Sai Baba’s portrait, who stayed back. Although Babasaheb tried to perform the pooja rites sincerely like his son, one day in a hurry to go to work he forgot to offer the sugar-candy as Naivedya. Immediately on the very day at Shirdi when Babasaheb’s wife and son went for Baba’s darshan in Dwarkamai, Baba exclaimed, “Mother! I had been to your house at Bandra with a view to having something to eat. I found the door locked. I somehow got inside and found to my regret that Mr. Tarkhad had left nothing for me to eat. So i had to return unappeased. This convinced Babasaheb that food and drink offered to the picture/idol of a God/saint reached Them.

3. In 1917, on full moon day of Holi festival, Baba appeared in Hemadpant’s dream and told him that He would come to his house for meals that day. His wife express doubt regarding the dream, but Hemadpant was sure that Baba would come to his house in any form. Just after meals were served and formal offering to Vaishwadeva and Lord Krishna were about to begin, Baba came in form of big and nice picture. It was brought by two Muslim friend of Hemadpant, Ali Mohammed and Ismu Mujavar. This confirmed that Hemadpant’s dream was true and Baba did fulfill His promise. Later during a chance meeting, Ali Mohammed explained to Hemadpant how and why he had bought that picture to him on that day. Ali Mohammed had bought this picture of Sai Baba from a hawker and hung it on a wall in ihs house at Bandra along with pictures of other saints. After some days, while Ali Mohammed was staying with his brother-in-law at Bombay due to abscess on his leg, his house at Bandra was locked. His brother-in-law told him that to keep and worship pictures of saints in the house was idol-worship and against the tenets of Islam, and if he desired an early cure of his illness he should immediately remove them from his house. Accordingly, Ali Mohamed asked his clerk to collect all such pictures from his household at Bandra and hand them over to his brother-in-law for immersing them into the sea. But surprisingly after three months, when Ali-Mohammed got well and returned to his house at Bandra, he found Sai Baba’s picture still hanging on the wall. He was a his wit’s end and wanted to understand how Sai Baba’s picture alone was not removed by his clerk with other pictures. Knowing Hemadpant to be a Sai Devotee, he brought it and gave it to him on that day for safe custody. With this incident, Baba not only convinced His devotees that He was present in His pictures also, but at the same time explained to a Muslim how idol-worship of Hindus was not incorrect or ill-placed.

4. When Kakasaheb Dixit invited Sai Baba to attend his son’s thread ceremony at Nagpur and Nanasaheb Chandorkar his son’s wedding at Dwalior, Baba asked them to take Shama on His behalf. When Kaksaheb pressed Him to Himself attend, He added that He would also reach ahead of Shama after visiting Kashi and Prayag. When Shama reached Gaya, he found Baba present there in priest’s residence ahead of him in the form of a picture – Chapter 43.

5. In addition to giving such experiences to His devotees, Sai Baba also propagated worship of Saguna (Manifested) form through His actions and advice. At Shirdi, He not only carried out repaires of old temples through His rich devotees but refused to allow any of His devotees to perform His Pooja unless all the idols in all the temples in Shirdi were first worshipped. 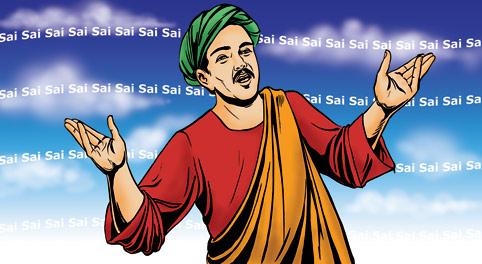 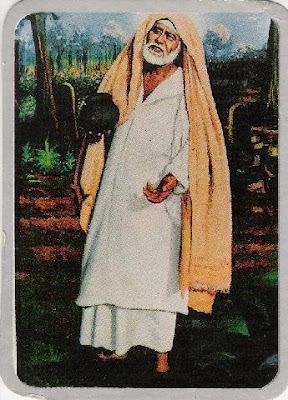