In prayer acknowledgment mail, i had hinted that i will be posting about Shirdi trip in detail and here it is.

We started from Baroda on October 16, 2009 and reached on October 17, 2009. Me and my family are fortunate enough to celebrate Diwali in Shirdi from last two years and this was the third year that we were present on the very same land where Baba lighted lamps with water on Diwali day. As per trend of Sai Baba of last two years rather say that as per planning of Baba, we get chance to enter Samadhi Mandir after lunch only. This reminds me of Baba’s teaching not to worship any God with empty belly. This year too the same thing happened. We started for Samadhi Mandir at about 2 pm from hotel. This time we had planned to purchase an idol of Baba. Planning was such that before going to Samadhi Mandir, we should buy the idol so that we may get a chance to consecrate it in Samadhi Mandir. But Baba had planned something else which came on surface later. We roamed about in many shops, but no idol touch our hearts, so ultimately we decided to have darshan first.

It was about 2:45 pm when we entered Samadhi Mandir. We reached main hall within 10 minutes and had a blissful darshan. More astonishing fact was that glass covers were removed which could not be thought of on the festive day admist huge crowd. Anyways, Baba had favored us and we were very fortunate to touch Samadhi and consecrate few things in our possession. My mother had prepared laddoos ( made of Suji, grated coconut and sugar with dry fruits) to be offered to Baba on Diwali and Baba made it a point to allow us to offer our love to Him. Still we were not satisfied and we ran to experience similar bliss once again. My brother and cousin were lined up to submit covers containing money for Laxmi Pooja to be performed after sometime in Samadhi Mandir.

The second time darshan was also beyond expectations and we came out of Samadhi Mandir quite contented. As soon as we came out, my brother and cousin were finding way to join queue for darshan. Thus again with some more greed for darshan we joined them. But on the way towards darshan queue i (or Baba !!??) changed my mind and decided to go to Dwarkamai. So my father accompanied me while my mother, brother and cousin headed to Samadhi Mandir. We first went to Baba’s Chavdi where He slept every alternate days. In ladies section nobody was there except me. It was a very enchanting experience. I touched walls of Chavdi and tried to visualize Chavdi Procession. I had fabulous opportunity to keep prayers at feet of Baba’s picture in Chavdi. Next we went to Dwarkamai. There also the scene was the same. It was about 4:30 pm. Dwarkamai was very calm with very few countable devotees and all seemed to engrossed in Baba with their eyes closed. What a heavenly peace it was !!! We first had darshan of portrait kept in Dwarkamai and sat in open space in between. My father and me sat talking about Baba and were having glimpses of Samadhi Mandir in CC Tv attached there. Dwarkamai had a different aura and i sat starring at Baba’s portrait and visualizing the days when Baba and His devotees played and rejoiced there. In between i again went up near portrait and then after to stone on which Baba used to sit to consecrate prayers.

Now, in Samadhi Mandir, due to Laxmi pooja, darshan queue was stopped but my mother, brother and cousin were fortunate enough to reach the main hall as they had entered well before. Now they had to wait there till Laxmi Pooja and Dhoop (evening) arti finished and me and my father had to sit in Dwarkamai as we had mutually decided to meet there. Oh what a wonderful chance did Baba gave !!! He made us sit in Dwarkamai and attend Laxmi Pooja and evening arti too. It was like earlier days were seen and experienced now. At about 7:15 pm after spending blissful hours at Baba’s resting place, we left for Samadhi Mandir mukh darshan. After taking darshan and purchasing few books we asked permission from Baba to go and rest with a promise to come next day.

Next day had blessings in disguise for us and we just became mere onlookers. With intervention of one of my Sai brothers, i got a chance to meet an elderly Sai devotee who is living in Shirdi since many years. His thoughts really touched me which will be shared on this blog. We were so much interested in his talks that we forgot that we were with them since morning and it was noon. While departing, he showed us a 3D picture of Sai Baba sitting in Dwarkamai. It went inside our heart with first sight only. He showed us the shop from where we could get that portrait. We quickly went up there and asked for it. Meanwhile me and my mother had a glimpse of an idol lying in a corner. The idol was asked to be placed before us. Baba’s face was smiling before us and we liked it a lot and it was decided to take this form of Baba with us. Thus while we were searching and roaming in many shops the previous day, Baba was waiting for us in the shop which we had never seen. Baba made His devotee a medium to reach to Him. Everything was settled within ten minutes and we purchased all other things to adorn Baba. So quickly we took Baba in Dwarkamai to be consecrated there. It was consecrated on the stone on which Baba used to sit. Although heavy rush was there in Dwarkamai, Baba facilitated an easy way for us. We were happy and contented with what Baba gave us. But Baba had much more for us in store. We are familiar with a priest of Samadhi Mandir and accidentally we met him. While exchanging Diwali greetings, we shared our happiness that Baba had come on His own to us. The priest was also happy to know that and he invited us to his home for formal pooja of Baba’s idol. That was happiest moment for all of us. We quickly rushed to his place and we were very surprised to see their hospitality. The priest did pooja whole heartedly.

One more thing Baba had planned for us. On Diwali night due to some reasons we were not able to light lamps. Also crackers could not be lit. But how could Baba forget this. We had wax lamps with us and priest asked me to light all of them in courtyard around rangoli made by them. A good number of lamps make the sight very bright. But we did not have crackers with us while priest asked us to light some of them before Baba after pooja. We denied and priest’s wife came from kitchen with two sparkles and gave us. She said, “Only these two are left for these two kids, i tried a lot to light them, but could not, now i understood Baba’s leela”. I was in tears to know that Baba had reserved such petty things for us, and did not make us feel something incomplete. We were served with delicious snacks which we took as prasad from Baba.

Admist all these things, departing time was nearing. We had to leave Shirdi on October 19, 2009. As a trend Shirdi gets crowded the very next day after Diwali so we were expecting only mukh darshan that day. But Baba allowed us to have darshan in Samadhi Mandir within our time limit. While asking for permission to leave and permission to call again i was totally in tears. I was feeling that i was leaving my heart and soul in Shirdi. Today also it makes me cry. We were in no mood to leave Shirdi, but our planning was to go to Nasik and from there to have darshan of Saptshringi Mata ji at Vani. I was reminded the incident from Sai Satcharitra about how Baba sends His pet devotee Shama to Vani inspite of his unwillingness. The same happened in our case too. Anyways this visit of Shirdi will be always in my memory. 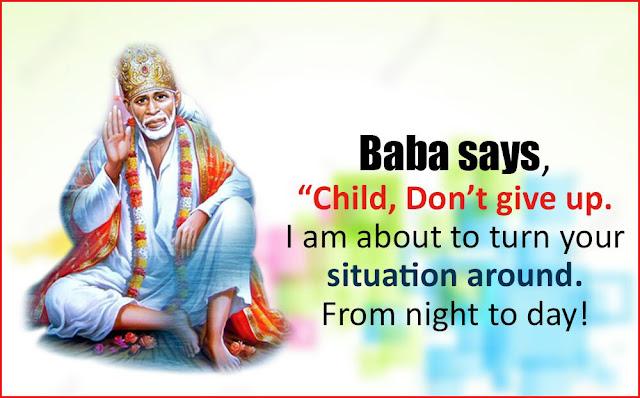 The significance of ‘Shri Sai Satcharitra’