A Note: In one of my earlier posts describing Shirdi trip, i had mentioned something like, “Few months back Lord Sai had inspired us to work on a unique write up for this blog. I had carried my diary and reference books to work on this write up while i was in Shirdi. I found enough space to sit in Dwarkamai and quickly took out essentials from my handbag to pen down the write up. The topic and its contents will be released soon, but at this point of time i feel it must be under-cover.” This is the very same post written while sitting in Dwarkamai. I was full of joy to know that Lord Sai Baba allowed me to write something on His own Masjid Mai while actually sitting here. Thus, for me, it is a blessing in abundance and i will preserve my diary in which wrote introduction of this post forever. Dear Sai Readers, i hope it will also be a blessing for you, since you are also given chance to read this write-up which is written with full access to Lord Baba’s Dwarkamai.

Dwarkamai is situated in between Samadhi Mandir and Chavadi – the resting place of Lord Sai Baba. One gets on his way to Dwarkamai by existing Gate No. 3 of Samadhi Mandir Premises, near Mukh-darshan. Alternatively one can reach Dwarkamai through Gate No. 4 which passes through a junction of shops in a small lane.Opposite to Dwarkamai, one will notice a long row of shops crowded with wide range of portraits of Lord Sai Baba in all sizes, idols, decorative pieces and much more which a visitor’s mind actually think of. Nearing Dwarkamai, the large chimney is visible as its first sight.

This simple and unadorned structure made up of iron roof and rough stones was center of spiritual instruction which was chosen by Lord Sai Baba Himself. It is certainly a matter of surprise to anyone and it will be hard to believe the fact it was the places where the famous Fakir named “Sai Baba” spent about 60 years of His life-span on this earth. When Mhlasapti denied to allow this roaming Fakir to make Khandoba temple His Abode, an old and dilapidated mosque was opted by Him and it was named as “Dwarkamai”. Rather, this was already destined and a clever step of Lord Baba to unite Hindu and Muslim community by naming a mosque after a centre of pilgrimage of Hindus (Dwarka – Land of Lord Krishna). This mosque was not restricted only to Hindus and Muslims, persons of every caste, creed, colour, religion, sect, intellect, position were free enter, seek spiritual treasure according to his capacity and return with content heart.

One would certainly be surprised to see this rustic structure as seat of Highly Spiritual Saint of this era and would rather be perturbed to guess the fact that this was the very same place where miracles, spiritual discourses and loving sports of dearest Lord Baba flowed in equal number to its visitors cum seekers. One standpoint which supports this action of Lord Baba is that He was dispassion incarnate and loved utter simplicity with modest living and wanted to set an example of non-attachment, so what place other than the old and dilapidated mosque would suit Him? In this mosque His properties were – a Chilam (smoking pipe), a Satka (small stick), begging bowl and a few pieces of cloth on which He used to rest and a Kafni on His body. He used to say, “Fakiri (poverty) is far better than Amiri (Kingship).” Although His followers (devotees) insisted to carry out repairs to this mosque, He tried to avoid them saying that there is no need for it. The mosque in whichever condition it was, was dearer to Him more than a diamond-studded gold palace. For Him, this was real meaning of Kingship and it has been noted that He never allowed His devotees to bring cash money or costly gift articles. This would rage Him to no limits, but when simple devotees brought something to eat for Him and afterwards forgot about the thing, the responsibility of reminding the devotee was on shoulders of dear Lord Baba. Hiss love flowed in abundance on such occasions and in turn Lord Baba Himself got indebted to serve His dear devotee for many births to come alongwith the present one.

The peculiarity of this mosque as stated earlier is that anyone was free to access it. Suffering bodies and its resident souls experienced that merely going inside this palace of Lord Baba confer blessings and one is free from every misery the very same moment. One always has a feeling of security, calmness, acceptance when he is in his mother’s lap. Lord Baba described greatness of this mosque by naming it as “Maai or Ayi (as said in Marathi language). Henceforth I would also refer it as ‘Mother Mosque’.

See what Lord Baba has said about this mother mosque: This is our Dwarkamai, where you are sitting. She wards off all dangers and anxieties of the children, who sit in her lap. This Masjidmai is very merciful; she is the merciful mother of the simple devotees, whom she will save in calamities. Once a person sits in her lap, all his troubles are over. He, who rests in her shade, gets bliss.”

One is surely to get enhanced motherly and homely atmosphere in this abode of Lord Baba. But as per His characteristic, He included Himself in His group of devotees and be a One of them! Lord Sai Baba is loving mother to many of His devotees and to many others He is God Supreme. Thus these two are closely synthesized in Lord Baba – a mother who looks after smallest of smallest domestic need of His child and the Supreme One Who is always concerned about spiritual upliftment of His devotees.

When Lord Baba moved to this dilapidated mosque, it was sheer small and not like the one which we see today. Rather, only the upper level existed where Lord Baba has settled and started to live like ordinary Fakir mortals. Few rich devotees thought of getting mosque repaired. With initial opposition of Lord Baba, they succeeded in getting permission through Bhagat Mhlasapti who intervened and pressed Lord Baba to accept request of His dear devotees. Shri Gopal Gund thought that he should repair and renovate the Masjid. But this work was not assigned to him. This was reserved for Nanasaheb Chandorkar and the pavement work for Kakasaheb Dixit. His permanently shifting to dwarkamai was in fact a turning point of His life and also the village as a whole because it marked close contact with local residents of Shirdi.

After sometime a peculiar and miraculous event attracted the villager’s attention and thereby they came to know about some supernatural powers existing in this so called mad Fakir. The incident has been narrated in Shri Sai Satcharitra and it has been very popular, that today also it is being remembered and has got place in creations of many bhajan lyrics writers, paintings of artists and writings of wide range of writers.

After this incident many leelas followed resulting in a continuous influx of devotees and the phenomenon has not stopped ever since then. It marked victory of good over evil, truth over falsity, light over darkness. Dwarkamai is thus always lit with lights, lights being a symbol of knowledge and spiritual wisdom. Here is complete version of this story: Sai Baba was very fond of lights. He used to borrow oil from shop-keepers, and keep lamps burning the whole night in the Masjid and temple. This went on for some time. The Banias, who supplied oil gratis, once met together and decided not to give Him oil. When, as usual, Sai Baba went to ask for oil, they all gave Him a distinct “No”. Unperturbed, Sai Baba returned to the Masjid and kept the dry wicks in the lamps. The banias were watching Him with curiosity. Sai Baba took the Tumrel (tin pot) which contained very little (a few drops) of oil, put water into it and drank it and forced it fall in the container. After consecrating the tin-pot in this way, He again took water in the tin-pot and filled all the lamps with it and lighted them. To the surprise and dismay of the watching Banias, the lamps began to burn and kept burning the whole night. The Banias repented and apologized. Sai Baba forgave them and asked them to be more truthful in future.

The Dwarkamai of today consists of two levels – the upper and lower one. The upper level consists of Dhuni Maa, A Puja Pillar, Water Pot on Stand, Kolamba underneath it, Nimbar, A Grinding Stone and Sack of Wheat Grains, Cupboard containing Chilams, a Large Portrait of Lord Baba – a living image of posture in which Lord Baba used to sit in Dwarkamai, Padukas in front of the Portrait, Dakshina Box and a bathing stone and lower level consists of A Tulsi Brindavan, Lord Baba’s portrait in His Sweet Posture and the stone on which He used to sit, Animal statues of a tiger and horse, A Tortoise tile, The Cooking hearth (Chula) and Wooden Post, Padukas where Baba used to Stand, Storage room and The Bell.

The lower level of mother mosque remains open all day and night allowing kids of Lord Baba to sit and rest. During three festivals of Ramnavami, Gurupoornima and Dushera the upper level is also kept open at nights.

Next Post in this Series: Complete Shirdi Guide – Dwarkamai and Its Constituents

Added Feature: Now you can get a guide in Shirdi, refer this article:
A Guide To Show You Heaven On Earth

Baba wants His devotees to follow their own path 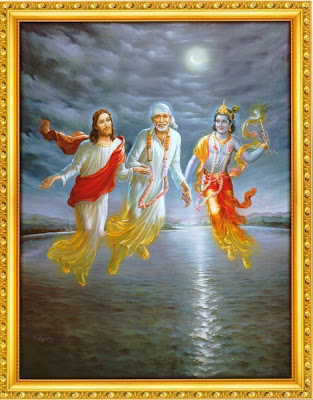 The stop of all Dharma, Always Chant Sai Sai