The following is a story of Damuanna, a rich businessman and how Saiji blessed him and Was ever with him and his family. It also reveals how Saiji loved and blessed His devotees, who surrended to Him completely.Saiji had told Damuanna the names that were to be given to the first two sons and Damuanna had noted them down in his diary. One year passed thereafter and Damuanna’s first son was born. When the boy was an infant, Damuanna took him to Shirdi and placed him at Saiji’s feet. He enquired, ” Baba what name shall I give him?” Saiji retorted, “Damya, did you forget, what I had told you in such a short time? You have noted down the name on the third page of your diary. Have I not told you to name him’Daulatsha’? As instructed by Saiji, Damuannna Named him as ‘Daulatsha’ (Dattatray Damodar alias Nanasaheb Rasane).After a few years thereafter, the second son ‘Tanashah’ was born.When Daulatshah became five year old, Danusheth took him to Shirdi for Chaul Karma. Saiji held the boy’s had in His own hand and taught him to write the word ‘Hari’.Saiji also gave guidance at the time of marriage of Daulatshah alias Nanasaheb Rasana. For this boy from a rich family, several proposals were coming from well-off families. One of the proposal was from his own maternal uncle who was offering a dowry of Rs. 2-3,000. There was also a proposal from a poor family from Pandharpur. Due to financial condition, the family could offer no dowry.Damuseth took a bunch of horoscopes to Shirdi and along wiht Madhavrao went to see Saiji. Madhavrao showed the horoscopes to Saiji and enquired, “Which proposal should they accept?” Saiji held the papers in his hands and selected the one belonging to the girl from poor family. Accordingly, Damusheth went with the alliance of his son with that girl.Daulatshah’s family life with his wife began on the path of happiness.

Nanasaheb was childless for a long time. Earlier he lost three children due to epilepsy. His wife, therefore, tried to persuade him to get married for a second time. He was depressed and sad. He lost interest in family matters.In such a frame of ming, once sai in front of Saiji’s Samadhi in Shirdi and began pleading’ “Baba, bless me either with a child or show me the path to Atma Kalyan”. While appealing thus, his eyes welled with tears. Just then he heard a faint voice from the Samadhi – “Santati Ho Jayegi” (You shall be blessed with a child)!” Nanasaheb’s joy didi notknow any bunds. He prostrated before the Samadhi. He was amazed and ecstatic – not because he was going to be blessed with a child but with realisation that his Sadguru resonded to is prayers. In 1928, he bore a son.As Nanasaheb had only one son, his father Danusheth prayed in front of the Samadhi and Nanasaheb was blessed with a second son in 1931.Once, on the occasion of Guru Poornima, a coin onf on Naya Paisa dropped from Saiji’s garland into Nanasaheb’s hands. He preserved it with great devotion throught all his life. He carried it in the button Patti of his shirt. He said, “My annual income is abut Rs. 5000. Even then no coin in the world can match this Naya Paisa. And no value can be attached to it – it is valueless.Nanasaheb had expressed a desire that the coin should be cremated along with his body and so was done. 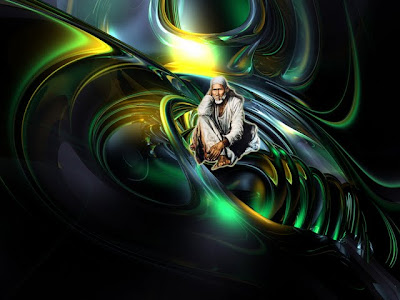 I Am An Astrologer – Shirdi Sai Baba