Everyone who visits Shirdi will step in Dwarkamai to take Darshan of Sai Baba’s life-like portrait. One can easily imagine those times when Baba did lots of leela sitting in the mosque. The power of the very place has been experienced by devotees. They have realized how worldly and materialistic issues got solved with Baba’s grace and the devotees then head on the path of spirituality towards self realisation. Many devotees gained good health by consuming Udi – The sacred Ash collected from the Dhuni. This Dhuni was lit by Baba Himself when He came to Shirdi and started living in the old and dilapidated mosque which He named later as Dwarkmai. One open and known reason why the Dhuni was lit by Sai Baba is that He wanted to teach “Discrimination”. We should always be aware of the fact that every moment we are getting closer to our end, which means our body is going to meet its end and be reduced to ashes. Lodging this fact in mind we have to be ever active to keep check on our karmas so that the soul too meets its destination.

In this post we shall be discussing why Dhuni Maa took birth and we shall share a few facts in the process of a quest. As a seeker of knowledge about Baba, this question arose which led us to start digging Shri Sai Satcharitra and find out a few references or hints which can help us to proceed.

So we started searching on Google about the word “Dhuni” which took us to this piece of information on Wikipedia which was sort of an introduction for us to the Nath tradition or Nath Sampradaya.

Nath Panth is a Yogi tradition of Hinduism. It is a sub-tradition with combined ideas of Shaivism and Yoga. The whole community of Nath considered Shiva as their first Guru or God.The Nath monks wear loincloths and dhotis. They also keep a sacred fire called “Dhuni”. At many places in Sai Satcharitra, it is mentioned that Baba kept the fire burning as an Agnihotri. The Naths recruited devotees into their fold irrespective of their religion or caste even converting Muslim yogi into their fold. They preached self-realisation, liberation and the Jivan Maran (Birth & Death) cycle. They besmeared Holy ash on their bodies. The tradition of Guru-Shishya has been brought up by the Nath panthis and the same has been preached by Baba. The main founder of this Nath sampradaya is Goraknath who hails from Tamil Nadu. He is popularly called “Korakkar”.

Well this was information which we found to be tallying with some of Baba’s traits. However we do not wish to relate or prove the belongingness of Baba to any particular sect. He has always preached all religions as one and as His sincere devotees we too do the same. Closely thinking we can notice that Dhuni – A living ember lived with Baba. It not only provided light and warmth to the Dwarkamai and Baba, it was a witness to innumerable miracles that took place there. There were moments when Baba used to be alone in Dwarkamai but Dhuni was still with Him as a witness. It is still present as a witness to make us feel the presence of Baba. The Dhuni was witness of the calm moments of Baba as well as the moments when Baba resembled a burning ember in anger. Baba used to take handful of Udi and gave it to His devotees while they were parting. Devotees then and now safeguard Udi and consider it equivalent to Baba and His blessing. Baba, a poor Fakir, as He lived during His lifetime, never left this way of living, and always wanted to show His devotees a way to simple living. As His life He ways to ward off karmas was also simple. He asked for dakshina from His devotees not for His own self but to buy wood to keep the Dhuni burning. This taught distinction from wealth to His devotees. They gave trifling amounts but Baba cared only to buy wood and match sticks.

We found further information about it.

The aims of the Nathas: According to Muller-Ortega the primary aim of the ancient Nath Siddhas was to achieve liberation while alive, and ultimately “paramukti” which it defined as the state of liberation in the current life and into a divine state upon death. The Natha Sampradaya is an initiatory Guru-shishya tradition. According to contemporary Nath Guru, Mahendranath, another aim is to avoid reincarnation. In The Magick Path of Tantra, he wrote about several of the aims of the Naths:

“Our aims in life are to enjoy peace, freedom, and happiness in this life, but also to avoid rebirth onto this Earth plane. All this depends not on divine benevolence, but on the way we ourselves think and act.”

Is it not interesting to relate the above fact that Sai Baba always wanted us to balance our karmas for a peaceful end. His ultimate aim, as we have always observed and presented in our many posts that Baba aimed at self-realization of His devotees. Material acquaintances can be many, given verily by Baba in the first stage of His devotion to His devotee, for the devotee to focus on what Baba actually meant to give. Baba has been vigilant in lighting up the spiritual quest in His devotees with minimal effort and the devotee starts looking forward to it. His methods are quite unique to draw His devotees onto the spiritual path. He transits from a devotee to a seeker and thereby the devotee becomes one with Baba, basically He becomes Baba.

The thoughts become actions and actions become karma. So the thoughts should be cared for to clear off the effect of past karma. Putting thoughts into actions will result in clearing karmas to a great extent.The Dhuni in Dwarkamai is perpetually burning and it reflects the same Dhuni in us which leads us to become Baba. 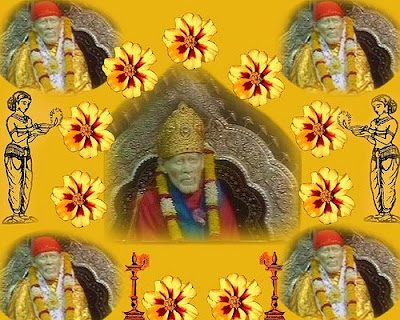 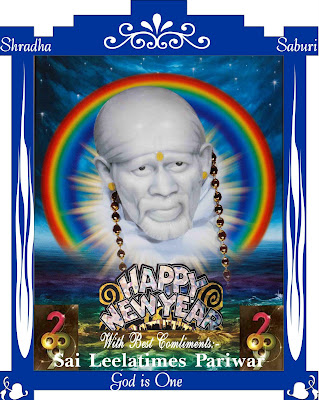 Thanks for New Year Wishes 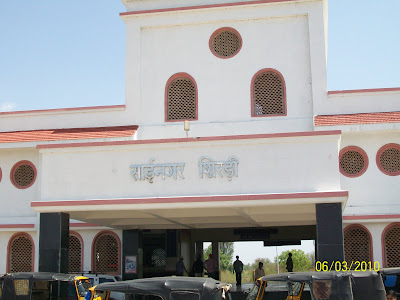