After composing Shirdi Maze Pandharpur, Dasganu Maharaj bowed to Baba and said, “I promise You Baba, from now on, I will not break my promise in the slightest and quit the job of the police officer”.

Sai Baba said softly, “Ganya Allah Malik Hai!” He was acquitted of the charges against him with the grace and blessings of Sai Baba. In 1903, he quit his job in the police department for good. After quitting his favourite profession, Dasganu Maharaj took up the profession of doing Kirtans and Bhajans of Sai Baba. He went to various places singing His glory and Sai Baba was then known in major parts of India. Baba knew what Karma Dasganu had to go through and this is how He set him on to the path. He wanted to make use of the talent that Dasganu was gifted with. Baba skillfully pulled up the wires to keep Dasganu away from the consequences of his profession, in fact, He made sure Dasganu follows the right path of a Kirtankar and set an example for generations to come.

Once there was a public kirtan of Dasgunu Maharaj in Mumbai. He went to Baba to take His permission to leave. Baba said, “O bridegroom! Where are you heading to?” These words of Baba immediately down a change of thoughts in Dasganu. He understood that to sing the glory of the Lord, purity of heart is necessary, the glory and charm of the outward appearance are of no use. The Lord is pleased with a pure heart and not by appearance. Dasganu Maharaj immediately removed the turban from his head and placed it in the Feet of Baba.

Baba blessed him and said, “O Ganya, Why should we bear the weight of a turban on the head, tulsi garland on the neck, layers of Chandan (sandalwood paste) on the forehead, and long flowing clothes? Kirtan is the throne of Narad and so we should also behave accordingly. Stories of yoga, meditation, discipline, state of samadhi should also seem natural in kirtan. In the guise of monks and nuns, by creating a web of sweet words, a few naive human beings may be deceived, but nothing can be deceived by it. Lord cannot be deceived with mere words, even if they are sweet but come from an impure heart”.

From that day onwards, Dasganu Maharaj used to wear only a dhoti on his body when he went to perform kirtan. No matter how cold or hot the weather was, he did not wear anything other than a dhoti. Dasganu Maharaj’s kirtans showed the way to Shirdi to many devotees and one of them was Lala Laxmichand.

A large number of devotees gathered to listen to kirtan in Mumbai that day. A new kirtankar saint was to be seen in Mumbai. Dasgunu’s kirtan was not full of words, nor knotted with philosophy, They were paradoxes of the life of simple worldly beings and the solution to those paradoxes. Dasganu Maharaj said, “Let me show you a living God today. That God eats, drinks walk, laughs, cries does sarcasm, and even gets angry like us. And Dasgunu staring at the picture of Baba continuously, started singing “Shirdi Maze Pandharpur”. Hearing this new tune from Dasganu Maharaj, the devotees started wondering, “Where is Shirdi?” Who is Sai Baba?“

Lala Laxmichand was working for Rally Brothers Company in Mumbai. He came here with his friend Dattatreya Majunath Bijur to listen to kirtan. A large photo placed near Dasgunu was seen by him. He immediately told his friend Bijur, “A few days ago, this Mahatma appeared in my dream. I have never seen Him or heard of His name. Yet He appeared in my dream and really made my life blessed.” Lala Laxmichand came up with the idea that if such a great personality exits this earth, then he must go and have His darshan. However, Laxmichand could barely bear the expenses of his family. Even though he worked hard, he was left with no savings. Making arrangements for a trip to Shirdi was a test for him.

One of the friends of Lala Laxmichand was Shankararao Madhavarao Nikam. His heart was dyed with love for saints and full of reverence for saints, he followed Narayan Maharaj. Narayan Maharaj was considered an Avadhut of high rank (though he was only interested in getting respect and deceiving people). Shankararao wanted to go to Kedgaon to have a darshan of the Maharaj. He made all the arrangements, but suddenly he pined to go to Shirdi instead of Kedgaon. Around nine at night, Shankarao went to Laxamchand and asked, “Do you want to come to Shirdi? I was bound to Kedgaon to have darshan of Narayan Maharaj, but I canceled my plan, and instead of going to Shirdi to take darshan of Sai Baba, so will you join with me?”

Laxmichand arranged for fifteen rupees on a loan for the trip and both the friends started to Shirdi after boarding the train from Boribandar. They got acquainted with a few Muslim passengers and collected much information about Baba on the way and reached Kopergaon, where he was reminded of the fact that one should not go empty-handed to a God or a King.

He wished to buy good guavas for offering them to Baba. It was early morning and no vendors were available at Kopergaon and so disheartened they hired a tonga for Shirdi. A middle-aged woman was seen running after the tonga with a basket on her head after they crossed Godavari river. Laxmichand requested the tonga to be stopped and asked the woman why she was running behind the tonga. She replied, “These are fresh guavas, take a few with you”. He paid for the guavas for what his pocket allowed. Still, a few guavas were left in the basket and the old woman gave them all to Laxmichand saying, “Offer the remaining guavas on my behalf of Shirdi Sai Baba”. Rather perturbed and astonished with this Leela of Sai Baba, they reached Shirdi.

A book that can be considered next to Sri Sai Satcharitra is available for reading on our blog, kindly do not miss reading it.

Lakshmichand put his head at Sai Baba’s Lotus Feet and took Its dust on his head. He offered garland and guavas to Baba and joined with other devotees sitting in the Dwarkamai. Baba with His intuition said, “You do bhajan on the way and enquire about Me to others. Why ask others? See with your own eyes what is in front of you, why unnecessarily ask others? Now decide whether your dream was true or not. Why did you take a loan from Marwadi to come Here? Arent your wishes fulfilled?”

The above conversation of Baba can be considered and followed even today. We try to indulge in talks and gossip about others and Baba. We unknowingly plant the seeds which are not good, in us. The perception of each human is different, they why not follow ours only. It is good to learn from others but we should carry the necessary wisdom to decide whether we are thinking right or not. To attain Baba, to know His depth, there is a need to indulge within and not with others. Even having God’s name on the lips and singing His glory if the focus is not inwards, then it is of no use. Baba resides in the hearts of all. Only we need to turn inward and see What Baba is with our own eyes of love. Baba is nowhere outside. We should turn our graze inwards to recognize Him seated! Baba pulls His devotees to Him in unique ways. Always remember the fact that if you are a devotee of Sai Baba, then it is Baba Who has chosen you, and not you who chose Baba. Having this gratitude always, we should never forget our ultimate goal. There is no need to show off that you are a devotee of Baba. It will be naturally visible to everyone.

We should ask for wisdom from Baba to recognize the divinity and differentiate the otherwise. If blessed so there won’t be any need to indulge and ask others about Baba. He is the ultimate truth just as the sun or the moon. They are in front of our eyes and we do not need to ask others about them. Our Baba is shining with all the luster in front of our eyes and seated in our hearts. The generation that we belong to, is the most fortunate than anyone else. The reason being we are bestowed with all the comforts that humans can think of. Still, we continuously crave for something or the other. We go on paying for things that only create face value for us. While simple things can satisfy the need, we go with names and complicate our thought process. Baba did not like Laxmichand taking a loan to come to Shirdi, will He like us spending unnecessarily just to put an impression on others. We should be careful using utilities and stop considering them happiness, as the Real Joy awaits us in completely surrendering to Baba.

We shall continue with the story in our next post. 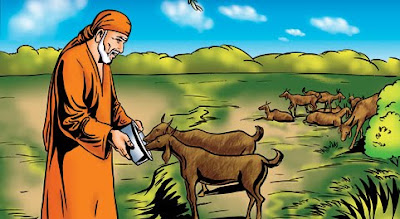 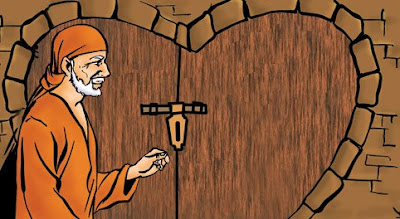