With Sai Baba’s blessings and guidance, this post is an attempt to give tribute to Mahabhakta Dr. Vinny Chitluri. She was lovingly called Dr. Vinny Maa. Due to her immense knowledge of the life history of Baba and Mahabhaktas, She was regarded as a Walking Encyclopedia on Sai Baba.

Dr. Vinny Maa merged into Baba on an auspicious Thursday, March 24th, 2022 (approx 10:15 am) at age of 79.  She had been Baba’s devotee for more than 70 years. All Sai devotees around the world felt the sadness and vacuum of her living in the bodily abode. At the same time, everyone is finding strength in the fact that She merged into Baba on Baba’s day. Sai Baba’s devotees’ communities are celebrating her life by remembering her and paying tribute to her in various ways.

Dr. Vinny Chitluri was an author who researched and documented Baba’s life history for 28 years (1994 to 2022). She authored many books on Sai Baba along with publishing videos, podcasts, and audiobooks too. Shri B.V. Narasimha Swami Ji was her family Guru. In her books, she mentioned Manjula S. as her spiritual guru. Her relationship with Sai Baba is that of a “best friend” Who loves her unconditionally. She was full of love and compassion.

Dr. Vinny Ji collaborated with Shri Nikhil Kripalani ji and Sai Baba’s Devotees Speaks Team (https://www.youtube.com/c/SaiBabasDevoteeSpeaks) and spent many many hours completing the recordings of the series on Baba’s Mahabhaktas, and her audio commentaries on the Sai Satcharita, rendering the greatest service to Baba and His devotees. Her lifetime of service to Baba has kindled Baba’s devotion in countless devotees all over the world and will forever continue to do so.

Dr. Vinny came down with a mysterious fever when she was a medical student in 1963 which caused her momentary death. With no no pulse or heartbeat, the doctors in the hospital pronounced her dead. Vinnyji recalls that while unconscious, she saw herself walking towards a blue light at the end of a long tunnel, and was pushed back to life by Baba. She was destined to do a lot of work for Baba, which she continued to do till the last breath.

Initially, Dr. Vinny Maa tried for a position at Shri Sainath Hospital, Shirdi hoping to serve Sai devotees by serving in the Medical field. But, she did not get any position at Shri Sainath Hospital. She realized that Baba had different plans for her and hence she offered her Doctorate Degree Certificates to Sai Baba’s Samadhi in Shirdi and then she set about trying to know more about Baba. She had met many Sai Mahabhaktas like Das Ganu, Lakshmi Bai Shinde, Dattatreya Nimonkar, Uddhav Deshpande (Shyama’s Son), Ramachandra Adkar (Madhav Adkar’s Son), and many more. Dr. Vinny Ji met Saint Kavi Das Ganu Maharaj when he came to Chennai for the All India Sai Samaj convention.

After meeting many Mahabhaktas and their descendants and after personally interviewing them she soon realized that “the more she learned about Baba the more ignorant she was”. It would take many lives to understand this inscrutable God, So she dedicated her life to the quest of knowing Baba and understanding His leelas.

From 1994 onwards, for the next two decades, Dr. Vinny Maa dedicated her life to researching the life history of Baba.  Dr. Vinny Maa collected a lot of original photographs of Sai Baba, Mahabhaktas, Shirdi, and other places connected with Shri Sai Baba. With this rare collection of photographs, she traveled across the length and breadth of India and did many Photo Exhibitions and Slide Shows on Shri Sai Baba at various Sai Baba Temples. She authored 10 books. Shri Sada Ghode Ji helped Dr. Vinny research and document Baba’s history. He traced back the families of Sai Baba’s devotees, traveling all of India for nearly a decade. He personally considers Dr. Vinny as Guru who helped him to attain Baba’s grace.

Dr. Vinny Ji mentioned this quest in her own words: “I wanted people to know what their Sadguru is like. Like, to me, Baba is my best friend. I know everything about my best friend, so I should know:- Why does Baba wear a Kafni? Why does He tie the cloth on His head? What could be the possible meaning of it? What did He like? How did He live? What was His daily routine? What was his morning routine? When did he go to Lendi Bagh? I found all these things from Khaparde diary, old Sai Leela magazines, and then put them together, and thus, the books came out.”

In each book, Dr. Vinny ji explained how Baba gave her motivation for the book. For example, Dr. Vinny shared her motivation for the Book “Baba’s Rinanubandh” – “My father in 1950, on one of his visits to Shirdi brought N.V. Gunaji’s Shri Sai Satcharita. We took turns to read it. At that time I read it more like a storybook. I learned about Baba’s leelas and His divinity. Through the years I read and reread it. But I could not understand many things. For instance, Mrs. Tarkhad’s son was sitting in the Dwarkamai right in front of Baba, yet he wanted to return home to offer naivedya to the photograph? Who was this child? Why couldn’t he just offer naivedya to the Shaktar Ishwar sitting in front of him? Was there another story in this story? ]Shri Sai Satcharita, Chapter 9] ”

Clearly, this highlights how deep her Sadhana was and how much she was devoted to understanding Baba’s leelas which eventually helped all devotees through her writings.

Dr. Vinny Maa mentioned that her father had always taught that any job that one gets in the family, the first pay goes to Baba and ten percent of earnings has to be put away to do charity work in Baba’s name. Dr. Vinny Maa’s purpose to go to the USA was to ensure she can save enough money to do the service of Baba without depending on others’ donations.

The story about How Sai Korhale temple was started and the installation of Baba’s Nija Padukas are given in detail in the holy book “Baba’s Vaani, His Sayings and Teachings” (Leela 72) and also on the website http://www.saiamrithadhara.com/korhale/korhale.html

Dr. Vinny was actively engaged with the temple activities organizing medical camps, blood donation drives, and building “RadhaKrishna Maaye Hall” where pilgrims (pad yatris) can take rest while on their pad yatra to Shirdi from Pune and other far places.

Dr. Vinny also did Pad yatra with Palkhi Processing from Pune to Shirdi in 1996. She encountered a lot of problems during this Pad Yatra e.g. walking shoes got lost, she had blisters, her medicines got stolen, and lack of amenities like a cup of piping hot tea. This motivated her to discuss with Sh. Sada Ji to arrange tea and Poha at Shri Sai Korhale temple. From this incident onwards, the social activities at Shri Sai Korhale temple started increasing and more arrangements were made for pilgrims going forward so they can have a good stay at Shri Sai Korhale temple while doing Pad Yatra.

Devotees are welcome to take the Holy darshan of Sai Baba’s Nija Padukas at The Shri Sai Korhale Temple which is 9 km from Shirdi.

Ref: The Five Blessed Bhiksha Houses | A Tour of Shirdi with Vinny Chitluri

Dr. Vinny Maa traced the five Bhikhsa houses and the route Baba used to take and created a walking tour. She used to take devotees on the route which Baba used to take for Bhiksha. She provided a detailed description of the route Baba took as He went on His Bhiksha rounds to the five blessed homes (Mahabhaktas – Sakharam Shelke, Vamanrao Gondkar, Bayaji Appa Kote, Bayaja Ma, and Nandaram Marwari). Vinnyji explained the significance of Baba’s actions and helped devotees understand that whatever Baba did was for us and on our behalf, and how we can remember and put into practice simple steps like offering food and water to any living creature or any Atithi who may visit our home.

Devotees can watch Dr. Vinny’s videos which give a lot of invaluable information about Baba:

It’s beyond our capacity to capture the greatness of Dr. Vinny Maa and her service to Baba. She has set an example of how to serve Baba in a selfless manner. She had no trace of ego and neither any attachment for fame or money. She dedicatedly followed Baba’s teachings in her words, thoughts, and deeds.

We offer our humble salutations to Mahabhakta Dr. Vinny Ji and pray to Baba to give her place in His Vaikuntha Dham. All Sai devotees will forever remember her through her books and her contributions to the path of Sai devotion. 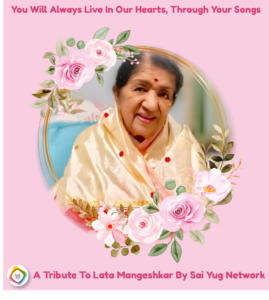